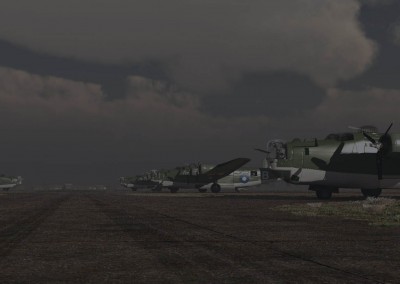 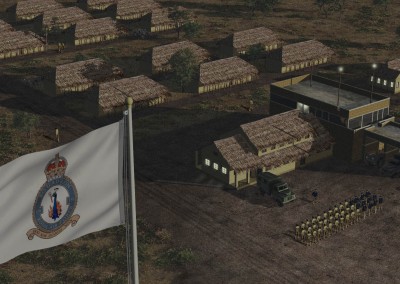 From their parking positions, the fully armed B-24 bombers roll onto the taxi way which leads them to the runway. 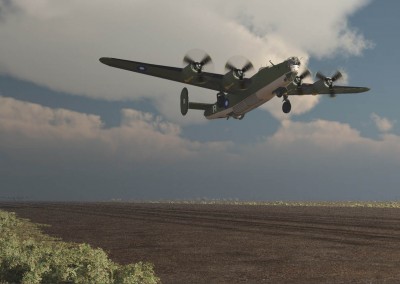 One-by-one into the morning sun. 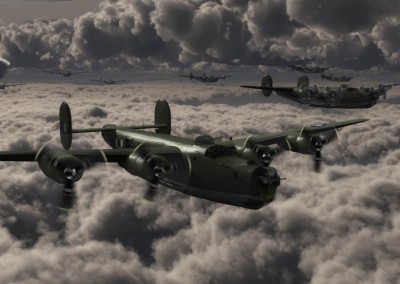 “A bumpy ride” as described by one of the pilots, Max Mazengarb, which had to pass through the monsoon skies. 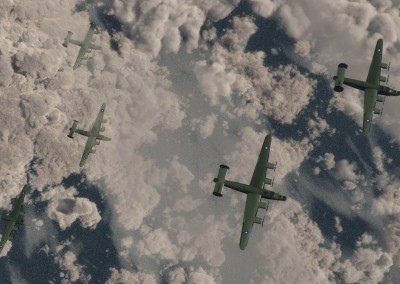 Over the monsoon clouds. The flight route from the airfield in Digri near Calcutta (India) over to the area of the Sattahip naval base in Thailand. Target: the S.S. Suddhadib. At this moment, the main target of the attack, the S.S. Angthong is already hit by bombs and on fire in the bay of Sattahip harbor. 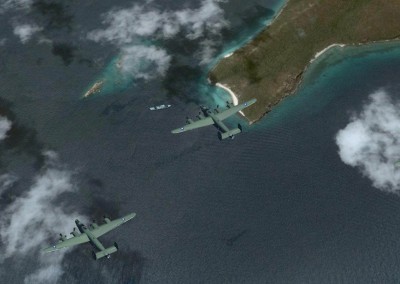 The bombers find the Suddhadib anchored north of Ko Chuang and west of the small islands of Ko Rong Nang and Ko Rong Khon. 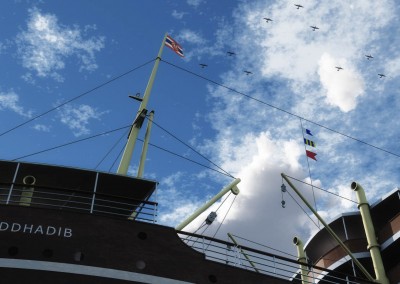 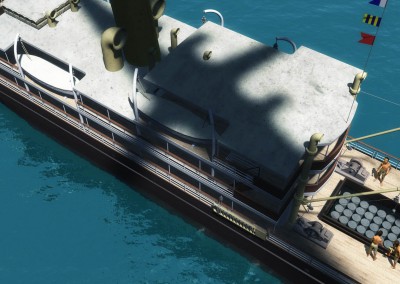 A shadow wipes over the target cast by one of the B24 bombers. The crew inspect their main cargo load: a shipment of fuel drums. 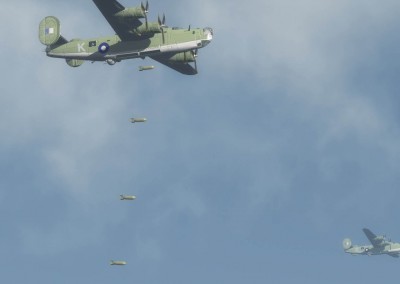 In the first wave, high altitude bomb drops try to strike the target beyond the reach of anti-aircraft fire from an altitude of 5000 feet. 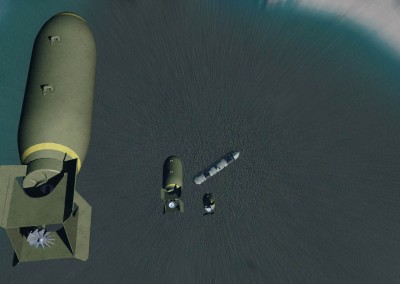 M-59 bombs in mid air. Their propeller tail fuses arm the bombs once outside the aircraft but stop spinning once the bombs are ‘live’. 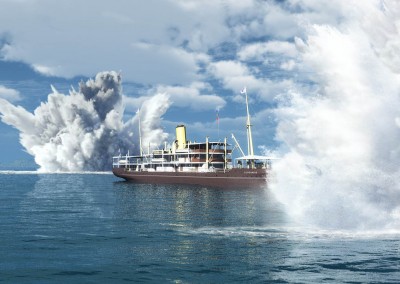 1000 lbs. bombs exploding a quarter of a second after hitting the water. 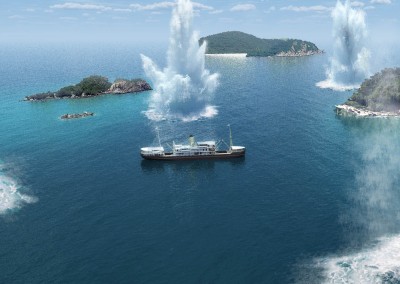 The high altitude bombing missed their target since this method is anything but accurate and mostly based on luck. As the crew abandons the ship and swims over to Ko Chuang, low altitude bombers approach their target. Front gunners fire away to avert any surface-to-air defense. 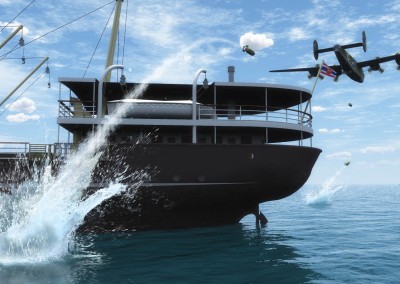 Skip bombing: designed to have bombs skip on the water surface, hit the side of the hull, sink and explode from underneath. Air crewmen reported of bombs actually jumping over the target! 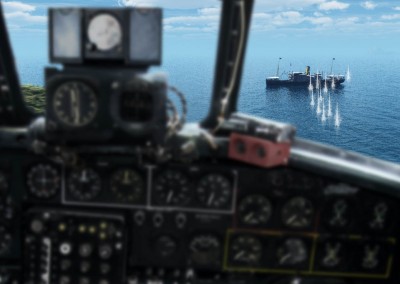 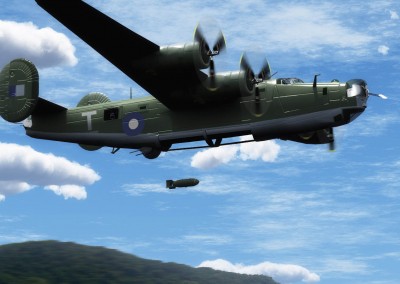 W/C Ercolani’s bomber (marked “T”) drops the fatal bomb from an altitude of under 150 feet. 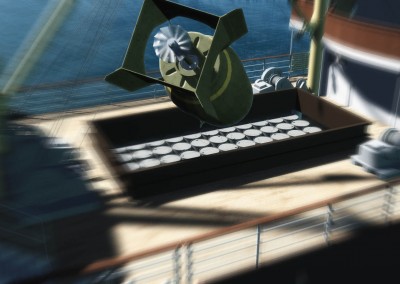 The bomb is bound to drop into the forward cargo area filled with fuel drums – however the tail fuse’s propeller did not have enough airtime to arm the bomb properly. 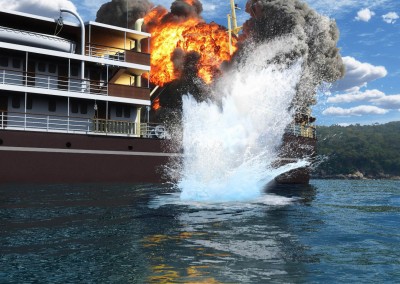 The bomb causes a massive fuel explosion and shoots out the starboard side. The damage to the hull from the unexploded bomb and fuel explosion from the inside is enough to bring the ship down. 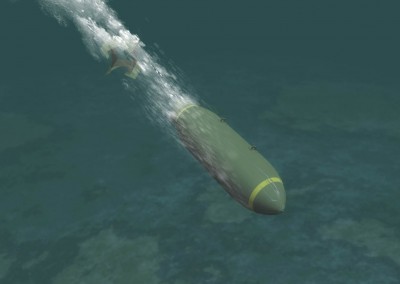 The unexploded bomb sinks to the ocean floor. The fuel explosion mushrooms into the sky. 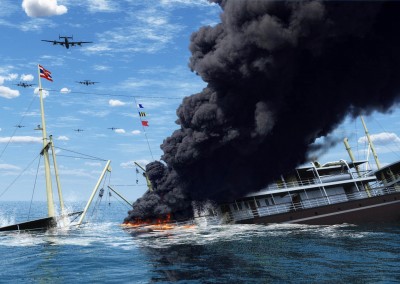 With the fuel drums fiercely on fire, the Suddhadib sinks as the bombers head home. 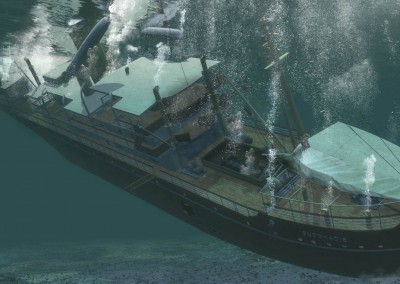 Sinking with a forward-starboard tilt. On the bottom of the ocean. 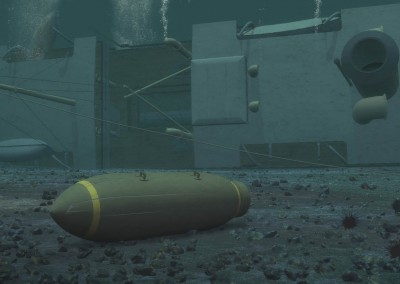 The unexploded bomb 28m away from the sunken ship.

VIEW THIS GALLERY IN VIDEO

Here the full gallery of digital illustrations of the Suddhadib attack edited in video with a proper soundtrack. Enjoy!

Each of the illustrations in this gallery observed an abundance of details that had to be unearthed with the help of historic records, documents, photographs, geographic data, interviews and of course a historic wreck at the ocean’s floor.

Read the story behind each individual picture and the detailed historic backgrounds involved in the Attack Research Page – the one-stop source for all questions surrounding the sinking of the S.S. Suddhadib. 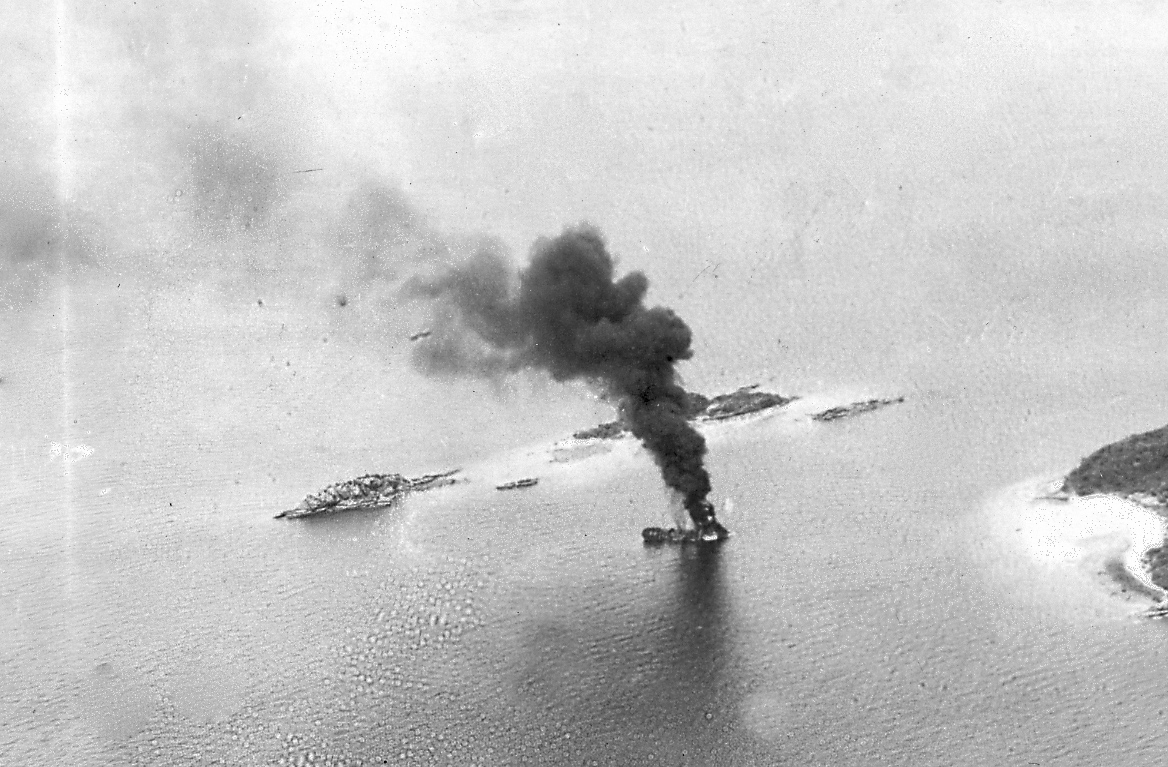